The Speaker was Mr. Raghuram , CEO, Mohan Foundation is pivotal organisation totally dedicated to the field of organ donation. The speaker narrated how awareness is being created for encouraging people to volunteer to donate organs Further he narrated on the process involved in identifying the recipients/beneficiaries and time lines involved in their propess, Finally he narrated the success stories of the organisation and mentioned the statistics of beneficiaries. The concept of brain dead was clearly explained with its importance for removing the organs from dead people.

The meeting was highly successful as the members were interacting at all stages with ulmost interest . Finally forms were distributed for registration along with I cards for donors. The speaker was given memento. The meeting was presided by Mr Gearge. 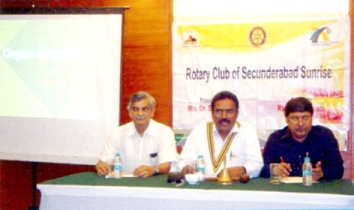