Do you own a piece of Rotary philatelic history?
https://rotarystamps.blogspot.com/
https://www.rotaryfirst100.org/philosophy/fellowship/fellowships/stamps.htm

The twenty-second annual Convention of Rotary International was held at Vienna, Austria, from 22nd to 26th June 1931.On that occasion, the first postage stamp ever to be issued in honour of any service club was released by the Austrian government.Using six of the eleven original designs of the popular pictorial issue of 1929–30, they were overprinted in various colours with a Rotary emblem and the words - “Convention Wien 1931” Fifty thousand sets were issued which were sold out within two days of release during the convention. The greatest part was acquired by collectors and kept as mint singles. A few exist in blocks of four. A large number was put on covers and cancelled at the convention. Only a few were used for regular postage bearing a normal cancellation.

The stamps depict various heritage buildings of pre-World War II vintage in the important cities of Austria; noteworthy is the one Schilling stamp, which features the National Library. 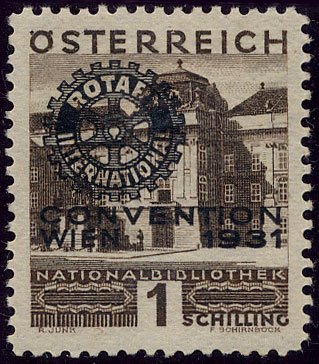 For more than 75 years, countries around the world have honored the work of Rotary with commemorative stamps.The first appeared in 1931, when Austria created an overprint -- a later printing over an officially issued stamp -- in honor of the RI Convention in Vienna.Other RI conventions have been commemorated with stamps, including those held in 1940, in Havana, Cuba; 1961 and 1978, in Tokyo; 1981, in São Paulo, Brazil; and 1987, in Munich, Germany.

For Rotary's 50th anniversary in 1955, 27 nations issued commemorative stamps. Many featured familiar Rotary imagery such as the gearwheel, which a Greek stamp incorporated along with the number 50. Images of Paul Harris and common scenes from the issuing country also were popular.

Rotary's 75th anniversary was honored with commemorative stamps from Benin, Cyprus, Djibouti, Dominica, Ghana, Iran, and others. The postal service of the Netherlands Antilles issued several postcards and stamps as well as a postage cancellation stamp in the shape of the Rotary emblem. The Maldives issued a series of stamps based on Health, Hunger and Humanity Grants.

In 2005, Rotary's centennial inspired stamps from nations including France, Ghana, Peru, and Togo.

Stamps have also marked the anniversary of Rotary in individual countries and depicted projects and humanitarian activities. A 1960 Bolivian stamp bears the Rotary emblem and commemorates a children's hospital sponsored by the Rotary Club of La Paz. A 1976 stamp honors 40 years of Rotary in Fiji by highlighting a club project that raised money to purchase an ambulance.

Many Rotarians collect commemorative Rotary stamps. Since 1955, a group now known as the International Fellowship of Rotary on Stamps has collected and researched Rotary-related philatelic material.

The history of Rotary is illustrated in stamps – around 2,000 of them, enough to fill 14 albums, as the collectors in the International Fellowship of Rotary-on-Stamps have discovered. Take conventions. Both the oldest and one of the most recent Rotary stamps commemorate RI conventions: the v1931 convention in Vienna and the 2011 convention in New Orleans. Countries have honored many RI anniversaries with stamps – even those without Rotary clubs, such as Maldives, which in 1980 issued four stamps paying tribute to Rotarians’ work to fight hunger on the islands. And with the advent of personalized postage stamps, Rotary clubs have issued stamps to raise money for projects such as literacy and polio eradication and
to celebrate their own anniversaries.

More than 200 people belong to the Rotary-on-Stamps fellowship, which publishes an encyclopedia and a newsletter and maintains a website to keep philatelists abreast of the latest Rotary stamp finds. The fellowship’s Bulletin editor, Emmanuel Serrière – who is 40 stamps away from a complete collection – walked us through some highlights, with the help of images provided by Richard J. Dickson, the group's curator and director of publications, and by Rotary History and Archives. See more at www.rotaryos.com